CDE has created this page to answer frequently asked questions regarding the University's Title IX Policy and related procedures.

Please review the full policy on Sexual and Gender-Based Misconduct and Other Forms of Interpersonal Violence for complete information.

Crystal C. Coombes is the interim Title IX Coordinator at George Mason University. You can reach Crystal by phone at 703-993-8730, or e-mail at: titleix@gmu.edu.

If you would like to make a report to the Title IX Coordinator you can do using our online reporting form.

The Title IX Office is located on the Fairfax Campus:

The University does not discriminate on the basis of sex or gender in any of its education or employment programs and activities. To that end, University Policy 1202 prohibits specific forms of behavior that violate Title IX of the Education Amendment of 1972; Title VII of the Civil Rights Act of 1964; and/or the Virginia Human Rights Act.

Mason’s sexual and interpersonal misconduct policy applies to students who are registered or enrolled for credit or non-credit-bearing coursework; all University employees; and third parties. This policy pertains to acts of prohibited conduct committed by or against students, employees and third parties when:

(1) the conduct occurs on campus or other property owned or controlled by the University;

(2) the conduct occurs in the context of a University employment or education program or activity, including, but not limited to, University-sponsored study abroad, research, on-line, or internship programs; or

The University prohibits Sexual or Gender-Based Harassment, Sexual Assault and Nonforcible sexual intercourse, Dating Violence, Domestic Violence, Stalking, Sexual Exploitation, Complicity in the commission of any act prohibited by this policy, and Retaliation against a person for the good faith reporting of any of these forms of conduct or participation in any investigation or proceeding under this policy (collectively, “Prohibited Conduct”). These forms of Prohibited Conduct are unlawful, undermine the character and purpose of the University, and will not be tolerated.

Conduct under this policy is prohibited regardless of the sex, sexual orientation and/or gender identity/expression of the Complainant or Respondent. 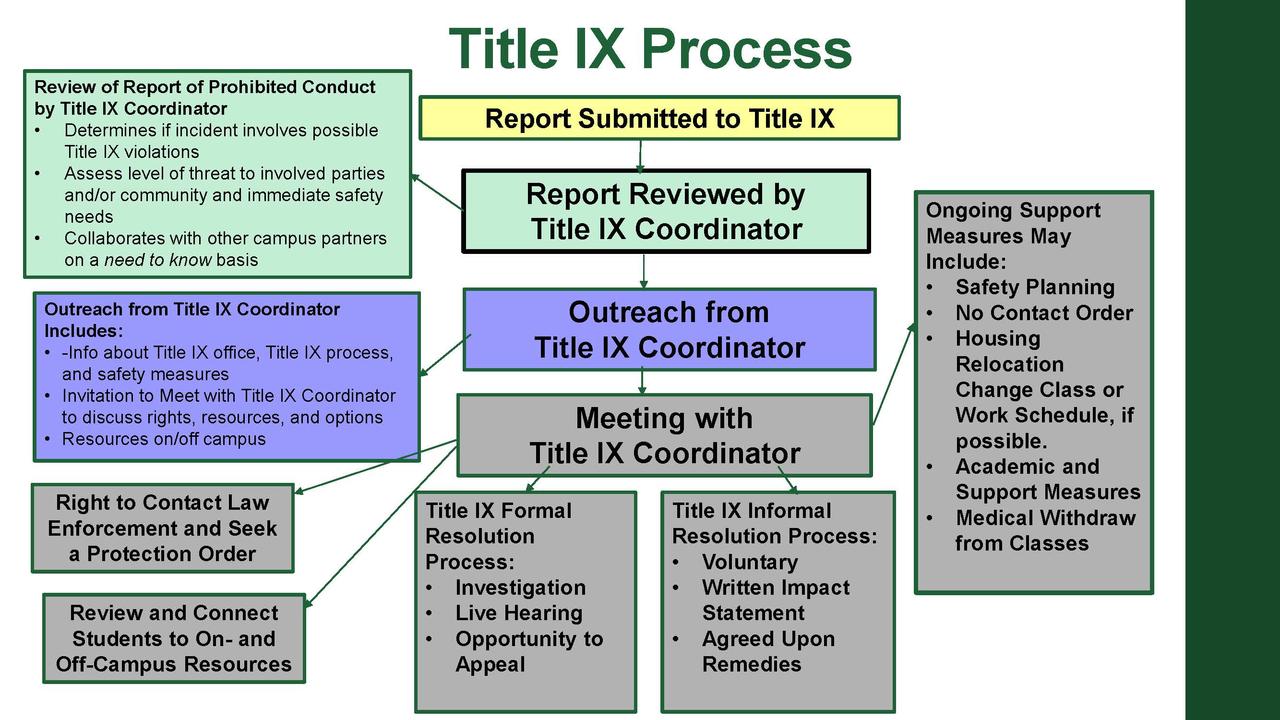 The specific procedures for reporting, investigating, and resolving Prohibited Conduct are based upon the nature of the Respondent’s relationship to the University (Student, Employee, or Third Party). Each set of procedures referenced below is guided by the same principles of fairness and respect for Complainants and Respondents. “Complainant” means the individual who presents as the victim of any Prohibited Conduct under this policy, regardless of whether that person makes a report or seeks action under this policy. “Respondent” means the individual who has been accused of violating this policy. “Third Party Reporter” means someone who learns about alleged Prohibited Conduct, committed by or against a community member, and reports it to the University. Third Party Reporters are not entitled to the rights that Complainants and Respondents have. “Third Party” means someone who is not affiliated with the University as a Student or Employee.

The procedures referenced below provide for prompt and equitable response to reports of Prohibited Conduct. The procedures designate specific timeframes for major stages of the process and provide for thorough and impartial investigations that afford all parties notice and an opportunity to present witnesses and evidence and to view the information that will be used in determining whether a policy violation has occurred. The University applies the Preponderance of the Evidence standard when determining whether this policy has been violated. “Preponderance of the Evidence” means that it is more likely than not that a policy violation occurred.

Procedures for Responding to Reports of Prohibited Conduct Committed by Students and Employees are detailed in Appendix A.

The Title IX Office receives reports from non-confidential employees, law enforcement, or concerned community members. We also receive reports from parents or directly from individuals who want to report their own experiences.  Most often reports are made using our online reporting form.

The Title IX office can still provide resources and support measures to individuals even if they chose not to pursue either process.

The University offers a wide range of resources for all Students and Employees to provide support and guidance in response to any incident of Prohibited Conduct. For comprehensive information on accessing University and community resources, including emergency and ongoing assistance; health, mental health, and victim-advocacy services; options for reporting Prohibited Conduct to the University and/or law enforcement; and available support with academics, housing, and employment, please review Appendix B: Resources and Reporting Guide for Students and Employees.

Upon a report of a sexual or interpersonal misconduct, the Title IX Coordinator will work with the parties and offices on campus to implement support measures. Following an investigation and a determination that a policy violation occurred, more permanent accommodations and support measures may be implemented.

Confidential Employees provide confidential, trauma-informed counseling or support. Confidential Employees will not disclose information about Prohibited Conduct reported to them by a student to the Title IX Coordinator without the student’s permission, unless there is a continuing threat of serious harm to the patient/client or to others or there is a legal obligation to reveal such information (e.g., where there is suspected abuse or neglect of a minor).

Any employee of the Student Support and Advocacy Center (“SSAC”), Counseling and Psychological Services (“CAPS”), or Student Health Services (“SHS”) or any other employee who is a licensed medical, clinical or mental-health professional (e.g., physicians, nurses, physicians’ assistants, psychologists, psychiatrists, professional counselors and social workers, and those performing services under their supervision), when acting in that professional role in the provision of services to a patient who is a student (“health care providers”); and (2) any employee providing administrative, operational and/or related support for such health care providers in their performance of such services.

Affirmative Consent cannot be obtained by Force. Force includes the use of physical violence, (b) threats, (c) intimidation, and/or (d) coercion.

a) Physical violence means that a person is exerting control over another person through the use of physical force. Examples of physical violence include hitting, punching, slapping, kicking, restraining, choking, and brandishing or using any weapon.

b) Threats are words or actions that would compel a reasonable person to engage in unwanted sexual activity. Examples include threats to harm a person physically, to reveal private information to harm a person’s reputation, or to cause a person academic or economic harm.

d) Coercion is the use of an unreasonable amount of pressure to gain sexual access. Coercion is more than an effort to persuade, entice, or attract another person to have sex. When a person makes clear a decision not to participate in a particular form of Sexual Contact or Sexual Intercourse, a decision to stop, or a decision not to go beyond a certain sexual interaction, continued pressure can be coercive. In evaluating whether coercion was used, the University will consider: (i) the frequency of the application of the pressure, (ii) the intensity of the pressure, (iii) the degree of isolation of the person being pressured, and (iv) the duration of the pressure.

Affirmative Consent cannot be gained by taking advantage of the incapacitation of another, where the person initiating sexual activity knew or reasonably should have known that the other was incapacitated. Incapacitation means that a person lacks the ability to make informed, rational judgments about whether or not to engage in sexual activity. A person who is incapacitated is unable, temporarily or permanently, to give Affirmative Consent because of mental or physical helplessness, sleep, unconsciousness, or lack of awareness that sexual activity is taking place. A person may be incapacitated as a result of the consumption of alcohol or other drugs, or due to a temporary or permanent physical or mental health condition.

The University offers the following guidance on Affirmative Consent and assessing incapacitation:

If the answer to either of these questions is “YES,” Affirmative Consent was absent and the conduct is likely a violation of this policy.

Incapacitation is a state beyond drunkenness or intoxication. A person is not necessarily incapacitated merely as a result of drinking or using drugs. The impact of alcohol and other drugs varies from person to person.

One should be cautious before engaging in Sexual Contact or Sexual Intercourse when either party has been drinking alcohol or using other drugs. The introduction of alcohol or other drugs may create ambiguity for either party as to whether Affirmative Consent has been sought or given. If one has doubt about either party’s level of intoxication, the safe thing to do is to forego all sexual activity.

Being impaired by alcohol or other drugs is no defense to any violation of Mason’s Title IX/sexual and interpersonal misconduct policy.